Update on Services Online Services and Pre-Scheduled Appointments. Read On...

Construction will continue with the concrete trail, site lighting, and the traffic signal crossing at Industrial Lane. Construction completion is expected in June 2020.

A 12-wide and 217-feet long pedestrian bridge will be constructed over the BNSF railroad.  Construction of the pedestrian bridge started in October 2019.  The bridge arrived in February in five sections and took approximately a month to bolt together.  With two cranes, and coordination with BNSF, the bridge was successfully placed March 31, 2020.

BNSF approved the plans and signed the construction and maintenance agreement.  A preconstruction meeting to discuss work in the BNSF right of way was held November 25, 2019.

Staff presented the project at a bike to work event in Interlocken on June 27, 2018.  The project was also presented to the public on August 15, 2018, at the Broomfield Community Center as part of the Walk Bike Broomfield Open House.

Plans were submitted to BNSF in May 2018 as part of the BNSF approval process.  Staff met to discuss options for the trail crossing at Industrial Lane.

A project presentation was provided to Open Space and Trails Committee (OSTAC) in February 2018, and again in April 2018, providing information on the project design and details about the trail crossing at Industrial Lane.

Staff presented the project at a bike to work event in Interlocken on June 27, 2018.  The project was also presented to the public again on August 15th at the Broomfield Community Center.

The Broomfield Trail - West Midway Pedestrian Bridge project will construct a pedestrian bridge and trail connections from West Midway Boulevard to Industrial Lane over the BNSF Railroad improving pedestrian and bike access to the US 36 Bikeway, Interlocken, and the Flatiron shopping district.  During the course of design, additions to the scope have been requested by staff and Open Space and Trails Committee (OSTAC).  The additions include a signalized crossing at Industrial Lane and a 12-foot wide pedestrian bridge and trail.

Before detailed design work for the bridge could begin, it was necessary to determine a conceptual alignment for the West Midway Boulevard Extension that will also cross the BNSF tracks.  The goal for this project was to plan for the bridge so that if and when the road extension is built in the future, the bridge would not be impacted.  Click below on the "Project Plans & Drawings" tab to see the proposed conceptual alignment for the West Midway Boulevard Extension.  Broomfield also needed to purchase a parcel of land from Hunter Douglas to allow for the bridge and future road right of way.  Lastly, the money for this significant project needed to be set aside.  These tasks have now been completed.

This project involves the construction a 217-foot long and 12-foot wide pedestrian bridge over the BNSF railroad tracks. The bridge will be a dark brown color and is made of COR-TEN steel. A 90-foot trail connection from the intersection of Hoyt Street and West Midway Boulevard will connect to the bridge. On the south side of the bridge, the trail will connect to Industrial Lane in the vicinity of the US 36 underpass. The Industrial Lane crossing will include a Pedestrian Hybrid Beacon (PHB), or light, that can be activated by bikers and pedestrians, rumble strips and signage to alert drivers to the crossing. If there are no pedestrians or cyclists that desire to cross Industrial Lane, the PHB light is not active and vehicular traffic passes freely.  Click below on the "PHB/HAWK Crossing" tab to see how these work.

An interpretive sign will be provided to explain views and historical information related to the site.

Public artwork is also part of the project. The sculpture is called, "Illuminate, and was created by David Farquharson. During the day, the piece is a subtle blue-gray. In the evening, the piece lights up in a variety of colors based on electromagnetic fields. Here is an image of the sculpture: 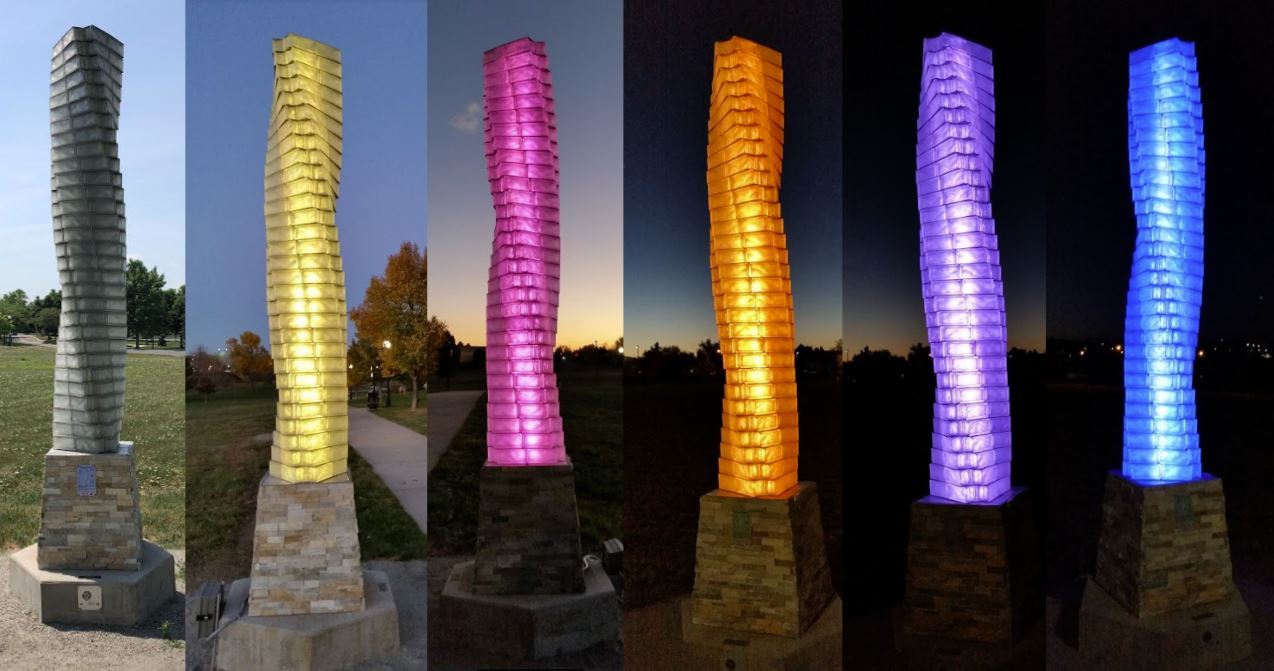 If you have questions or would like to comment on this project, please call Ed Thompson, Project Manager, at 303-438-6205, ethompson@broomfield.org. 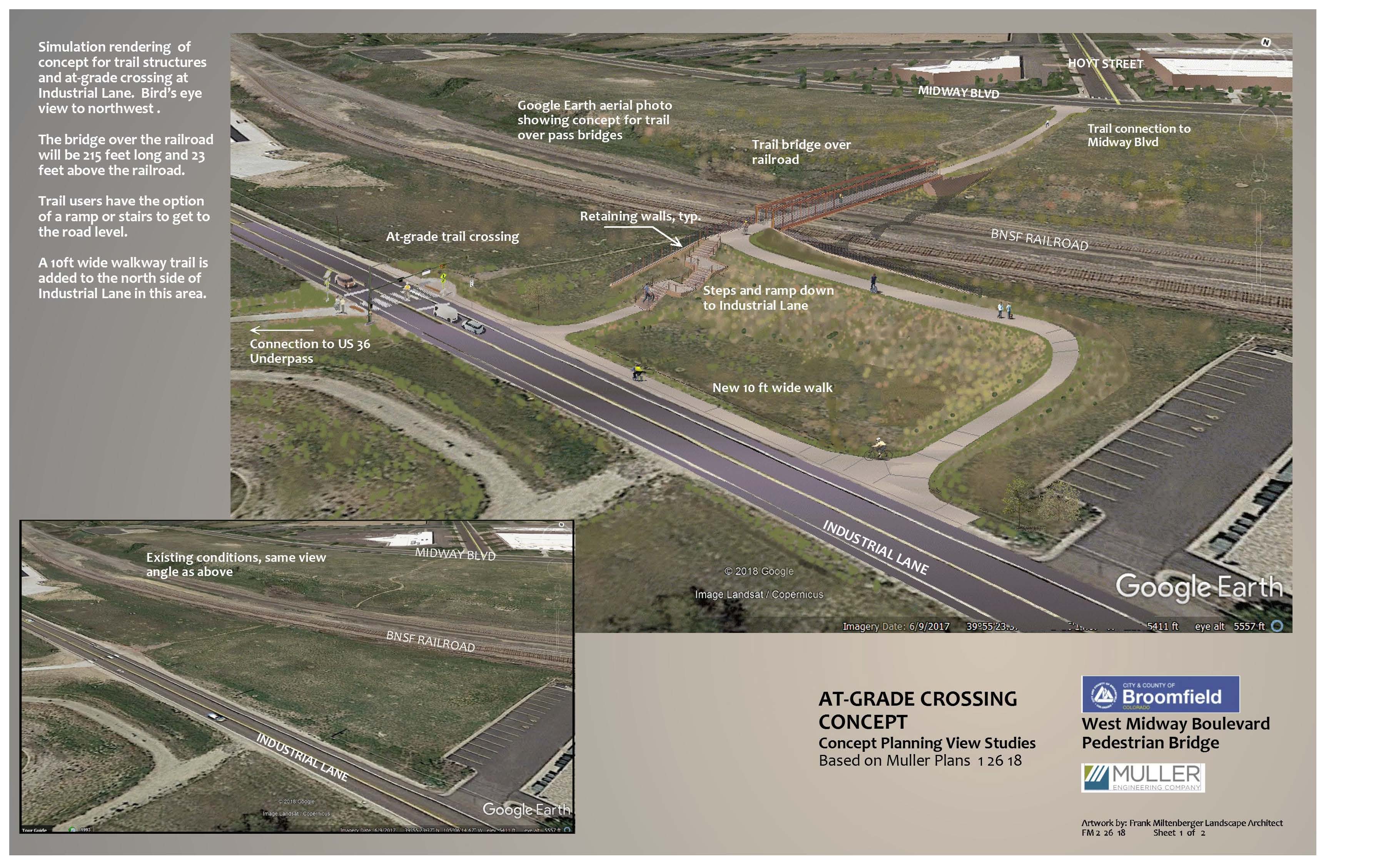 The crossing of Industrial Lane will be enhanced with a HAWK beacon, a striped crosswalk, rumble strips and signage.  Click HERE to see a rendering of the proposed crossing.

A HAWK beacon (High-Intensity Activated crossWalK beacon) is a traffic control device used to stop road traffic and allow pedestrians to cross safely. It is officially known as a Pedestrian Hybrid Beacon (PHB).

The pedestrian bridge will span more than 200 feet across the BNSF railroad.  The City is coordinating with BNSF to meet railroad requirements.  The design plans have been submitted for BNSF review.