This project is complete!  Thank you for your patience. 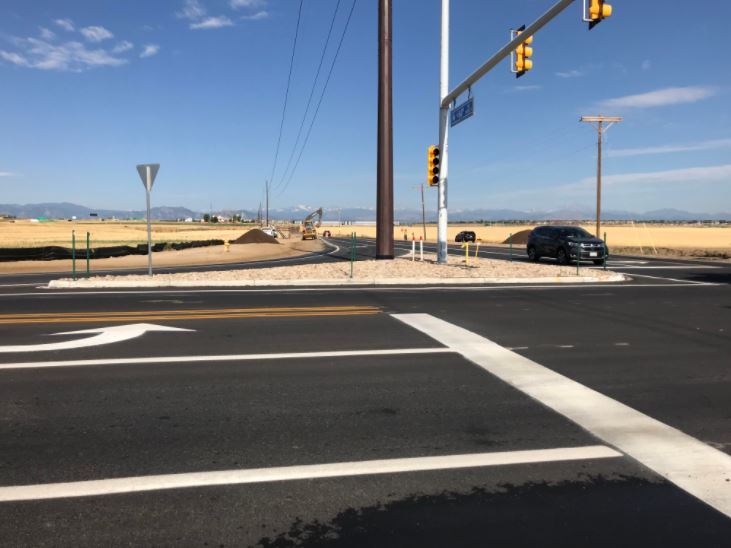 DeFalco Construction, Inc., the contractor for the 160th and Huron Turn Lanes Project, mobilized onto the project site on April 29, 2020.

Vehicles going through the intersection would no longer need to wait behind left-turning vehicles, which reduces delays and reduces the potential for both rear-end and broadside crashes.  There is also an important safety benefit to the provision of left‐turn lanes, particularly at the relatively high posted speed (45 mph) along a rural, two‐lane roadway with minimal shoulder widths. Addition of the right turn deceleration lanes in both the northbound and eastbound directions benefits the vehicles decelerating out of the through lanes and reduces the potential for rear-end type crashes.

Extraction Oil & Gas (Extraction) is responsible to construct an eastbound to southbound right turn lane at this intersection per the operator agreement.  Since Broomfield is improving all legs of the intersection, staff has drafted a separate reimbursement agreement to require Extraction to contribute $112,000 as their pro-rata share. The eastbound to southbound turn lane is needed at the current traffic volumes regardless, and funding is available to proceed with the project with or without reimbursement from Extraction.

Construction of the project as designed will require a change in use of Broomfield open space to Broomfield right-of-way in order to install a right-hand turn lane from eastbound 160th Avenue to southbound Huron Street.  This requires reimbursement to the City and County of Broomfield Open Space Fund.

An invitation to bid was posted to BidNet on January 8, 2020, and four contractors submitted bids.  The lowest responsive bidder was DeFalco Construction Company and is recommended by staff to complete the project.