INMATES IN CUSTODY
To find out who is being housed at the City and County of Broomfield Detention Center, along with a list of their charges, bond amount, and next court date and time, click here.

Additionally, inmate information can be obtained via the telephone automated voice attendant by calling 720.887.2000.

ESTABLISHING PHONE ACCOUNTS
Friends and family can establish a phone account for inmate use by contacting Securus on 800.844.6591 or clicking on this link. Using this service provides a voicemail feature to leave inmate messages. The inmate phone system does not allow outgoing calls to cellular phones.

Additionally, the facility offers phone cards for purchase with inmate funds. Detention staff can provide instructions for inmates with credit on their account how to obtain phone cards.

BONDING OUT AN INMATE
The Detention Division supports the mission and values of the Police Department by securely and humanely maintaining custody of those citizens under our supervision and by preparing them for reintegration into the community through services and programs.

If you are posting an inmate's bond, please have the exact bond amount in cash. Detention Center staff is unable to accept checks or credit cards for bonds, and change is not available. For every bond, there is an additional $10 bond fee charged by the court and a $30 booking fee charged by the Detention Center, each of which must be paid separately in cash. For example, to post a $200 bond, you must bring $200 in cash, along with a separate $10 bond fee and a separate $30 booking fee, also in cash. The bond and bond fee cannot be combined in one cash payment. 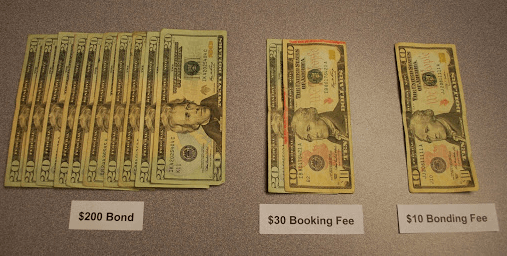 INMATE MAIL
Only letter and legal size envelopes are accepted. The only items that can be sent with inmate letters are photographs printed on photographic paper (no Polaroid photographs). Photocopies of photographs or pictures are not acceptable. Inmates cannot have more than 10 photographs in their cells. Stamps, envelopes, stickers, or phone cards are not accepted. Do not send material printed from the Internet. When mail is rejected, the inmate will receive a written notice stating the reason(s) for the rejection.