Algae are a critical component of a healthy and diverse aquatic ecosystem. Algae form the base for the entire aquatic food web. They provide nutrients and energy for zooplankton like Daphnia and much larger aquatic animals like fish and waterfowl. Algae, like plants, use sunlight to convert nutrients into energy through the process of photosynthesis. During photosynthesis algae convert carbon dioxide (CO2) into a useful food source for itself and releases oxygen. The oxygen that algae, along with other aquatic plants, provide to a waterway is crucial for the survival of all its other inhabitants. 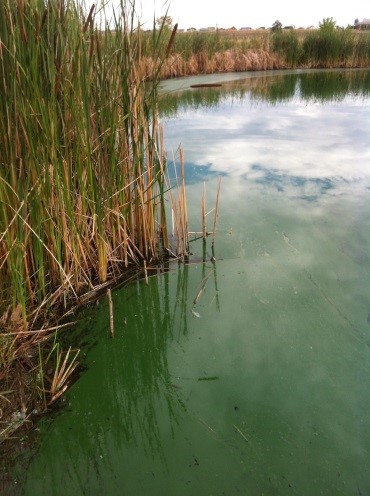 What is happening when the water looks like pea soup?

Under the right conditions, algae can proliferate to a point that it overwhelms a pond or an area of a lake. These conditions can include a combination of the following:

These algal blooms are the result of a process called eutrophication, usually caused by excessive amounts of nutrients, organic matter and sediments being added to a lake or pond. Sources of nitrogen and phosphorus in our ponds include:

When algae quickly multiply, they can form large blooms, which may sometimes appear as thick, dense mats of surface scum. This surface scum is typically green or bluish green and can look like someone spilled paint into the water. This mass proliferation of algae can disrupt the natural balance of the aquatic ecosystem and lead to low oxygen, decreased light transparency, possible fish kills, aesthetic issues, and human health concerns. These large blooms are referred to as Harmful Algal Blooms (HABs) when they have a negative impact on the environment, human health, or the economy. 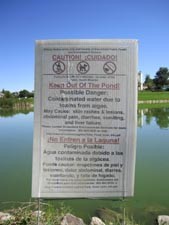 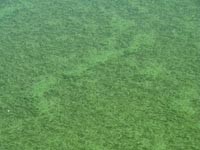 Certain types of algae (e.g., cyanobacteria) may release toxins (e.g., microcystin, anatoxin) into the water that are harmful to humans, pets, and other wildlife causing rashes, dermatitis, or in some cases severe illness. When a HAB is suspected in one of Broomfield's ponds, an Environmental Services staff member collects samples of the scum to be identified and quantified in the laboratory.

If the sample contains sufficient amounts of microcystin-producing cyanobacteria, the level of microcystin is also quantified. If results are above the action level of 20 ppb (recommended by the World Health Organization for recreational use), signs will be posted around the body of water notifying residents to the potential danger. The signs will remain in place until the toxin level drops below the action level.

With respect to pets and potential exposure to harmful algal blooms, the EPA also has a 30-second YouTube video, "If in Doubt, Stay Out!"

Additional guidelines to follow if your pet is exposed

Bacteria in the Water

Bacteria, just like algae, are a natural component to any aquatic environment. When stormwater runoff carries excessive amounts of pollutants, it can cause bacteria levels to increase. Coliform bacteria (i.e., fecal coliforms like Escherichia coli) are a type of bacteria common to the intestinal tracts of animals and humans. One important way that citizens can keep bacteria levels low in the water is to pick up and properly dispose of dog feces. One gram of dog feces (the weight of a business card) contains 23 million fecal coliform bacteria (from van der Wel, B. 1995. Dog Pollution. The Magazine of the Hydrological Society of South Australia. 2(1)(1)).

Officially, wetlands are areas that must meet three qualifications. The area must:

Riparian areas are the zones surrounding ponds, lakes, or rivers that act as the interface between the aquatic habitat and the terrestrial habitat. There can be overlap of wetlands and riparian areas, but often riparian areas are also comprised of different vegetation and are not necessarily saturated with water frequently or long enough to fulfill the definition of a wetland.

Both wetlands and riparian areas serve important functions in processing and regulating runoff. They slow flow rates and hold back water during floods and conversely, release it in dry periods; they reduce flood damage and soil erosion. Groundwater is recharged, and pollutants, including sediment and nutrients, are trapped or removed. Additionally, the riparian zone can be small in comparison to the surrounding upland area but it is unique, rich in animal and plant diversity, and important for good water quality. Riparian areas in Colorado provide shelter, food, water, and migration routes for the majority of amphibians, reptiles, birds, and mammals. Many different plants can live along the banks of a pond, including sedges, rushes, and other water-loving plants, including cattails.

Stormwater retention ponds are often designed with buffers that essentially function as riparian areas or constructed wetlands, preventing erosion and minimizing build-up of nutrients, sediment, and other pollutants. An added benefit is the wildlife that they attract. Cattails are a common plant used because of their ability to filter runoff, take up nutrients, reduce erosion, and provide nesting habitat, food, and cover for animals. However, cattails often encroach into shallow ponds, reducing the volume of water and sometimes blocking drainages. Areas of stagnant water can also result and become breeding grounds for mosquitoes. When the stormwater functions of the pond become compromised by cattails, a control strategy will be implemented.