How to Haze a Coyote:

Broomfield’s Coexistence with Wildlife Policy  identifies coyote hazing as one of many strategies to reduce or prevent conflicts between humans and coyotes. Coyote hazing activities are also a key component of the Denver Metro Area Coyote Behavior Study. 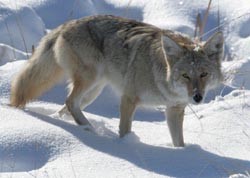 Coyote hazing can be defined as methods that use deterrents to move an animal out of an area or discourage an undesirable behavior or activity. Hazing can help maintain a coyote’s fear of humans and deter them from residential areas such as backyards and playgrounds. Hazing does not permanently harm the coyote, humans, or property. Under no circumstances should a person approach a coyote or haze a coyote that cannot run away or is sick or injured. Citizens should avoid hazing coyotes near an active den site or pups, and instead should report aggressive coyote behavior under such circumstances to Broomfield Open Space staff.

Broomfield encourages residents to practice low-intensity hazing on their own private property, in their neighborhoods, or in other locations throughout the community when coyotes are too close so that coyote conflicts can be prevented.

Low-intensity hazing, intended to scare away coyotes, includes:
Once again, these techniques are not intended to cause harm to the animal, but rather to reinforce a healthy fear level and discomfort around humans. Due to Broomfield Municipal Code: 9-72-020, the shooting of coyotes is not permitted anywhere in Broomfield County.
For any questions about coyote hazing in Broomfield or coyote issues in general, please contact Pete Dunlaevy at 303.438.6216.