The Mesa Zone Booster Station will be sized to serve daily distribution pressure, flows and fire flow protection to the Mesa and Walnut water distribution zones. In 2018, Arcadis U.S. was selected to design the existing Airport Booster Pump Station for redundancy.  In 2019, the project was suspended when funding was needed for another project.  In February 2021, Council approved the agreement with Arcadis U.S., the design is expected to be complete by late 2021.

The City and County of Broomfield owns and operates the existing Airport Pump Station, located east of Simms Street near Rocky Mountain Airport. This facility provides pressure to the Mesa and Walnut pressure zones of Broomfield’s potable water system service area. Presently, this area is a “closed” system and the only source of water pressure is the Airport Pump Station. In August 2016, the Airport Pump Station experienced a failure due to a complete loss of pressure to its service area. Fortunately, there was enough residual pressure within the distribution system to maintain minimal service during the outage. Extensive repairs were performed and normal operation resumed. This failure highlighted the vulnerability of the system that combined with growth in the service area emphasized the need for redundancy to maintain required levels of service to customers. Broomfield has identified a location for a redundant pump station, initially named the “Mesa Pump Station” which will serve as a back‐up pressure source for the Mesa and Walnut pressure zones. Broomfield is currently consulting with Arcadis to perform a hydraulic analysis to determine performance criteria for the proposed future Mesa Pump Station. 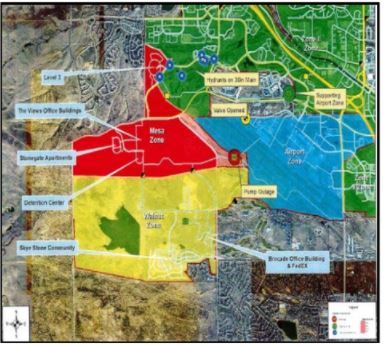